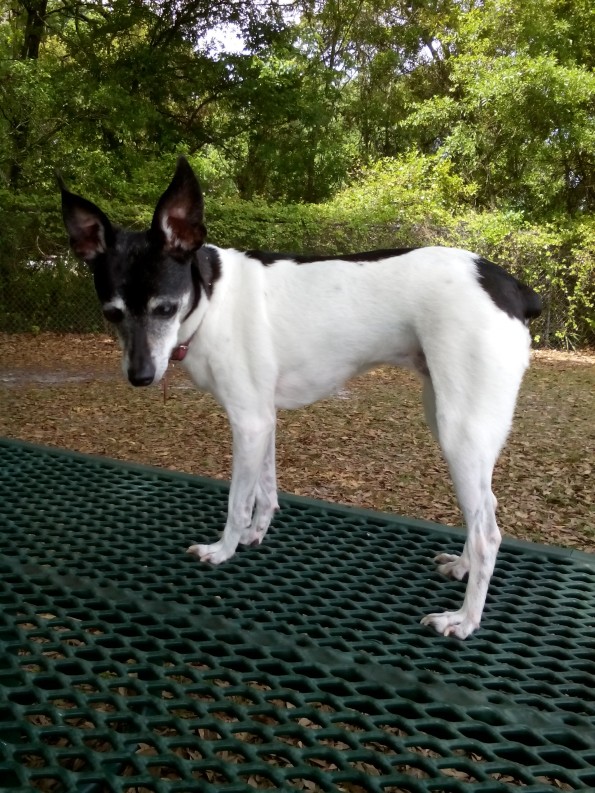 Late at night on October 29th, 2014 a frantic couple brought their sweet 16 year old dog into our clinic. She had been attacked by another dog, a dog much larger than her. “Abbey” had been bitten all over her body, with punctures that went deep and put her fragile little body into shock. She was immediately brought into an exam room by a technician to assess the damage. When Dr. Rixford looked at her moments later, she informed Abbey’s family that she would need to take the not-even-20-pound-terrier into surgery right away.

One wound in particular was worrisome to Dr. Rixford, where some of the fat from Abbey’s abdomen was visible outside of the skin. Dr. Rixford wanted to make sure that none of the punctures went through to Abbey’s organs, so a radiograph was also taken. Luckily for the little dog, she did not sustain any internal damage from the attack. Abbey’s surgery was still extensive though and took around two hours to complete. Drains were placed in Abbey’s larger wounds to let the blood and other fluids out while keeping bacteria from getting in. Sutures, or “stitches,” were placed to close up some of the smaller puncture wounds. The surgery also included an abdominal ‘exploration’ in which Dr. Rixford checked her organs for signs of injury. In order to promote healing after the surgery, a K-Laser was also used on Abbey’s wounds. The K-Laser helps reduce pain and inflammation, as well as promoting wound healing by stimulating those cells which regrow tissue.

By the time Abbey was awake after her surgery, it was around 9 o’clock at night. She was given antibiotics and pain medication and brought to an overnight emergency clinic for observation. Despite Abbey’s experience, she proved that she was tough enough to handle anything. Abbey has since come back to our clinic for removal of all her drains and sutures, and even her annual vaccines. She even sent her younger brother, a 2 year old lab mix, to the clinic when he split his nail open.

Accessibility by WAH
Call Us Text Us