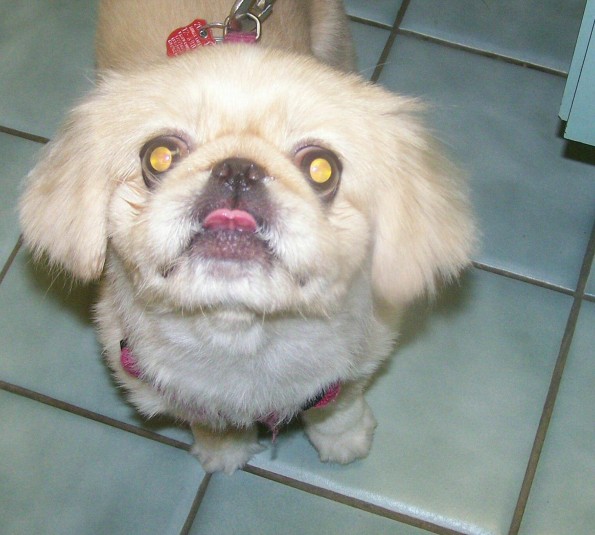 A little Pekingese named Abbie came into All Pet Care Hospital when she began squinting and rubbing her eye. Little did she know that she would soon have ‘Frankenstein eyes’ that glowed green under a black light in the clinic. Don’t worry though Abbie is no monster; Abbie’s eyes glowed because of the drops Dr. Rixford put in to check her eyes for corneal ulcers, called fluorescein stain drops.

Abbie did indeed have a scratch which glowed under blacklight, and showed a black spot in the middle of the scratch like a bullseye meaning that the ulcer went far down into the cornea, called a descemetocele. A descemetocele means that the ulcer is one small cell layer away from being inside of the eye. This is very dangerous as there is a great likelihood of complete perforation of the eye, and therefore loss of the eye from the inner liquid coming through. Deep ulcers can also cause permanent scarring of the cornea.

Corneal ulcers are common among pets, especially those that are more playful with other pets. The most common cause of ulcers in most animals is trauma to the eye, such as a scratch or abrasion. Corneal ulcers are very painful, and can cause the pet to squint or close the eye entirely, and often owners see discharge around the eye. The severity of the ulcer depends upon how far into the eye the trauma goes. There are multiple cell layers to the eye, so the more layers in, the harder the ulcer is to treat and to heal. Medications need to be used both to prevent infection and to help the eye to heal.

Dr. Rixford told Abbie’s dad that he might have to get Abbie’s eye seen by a veterinary Ophthalmologist or potentially have the eye removed because of how bad the ulcer was. The other option was to medicate the eye and hope that it healed correctly. Abbie’s dad had to work diligently; giving three different eye medications every day and continuing to come for recheck visits so Dr. Rixford could stain the eye and make sure the ulcer was healing. She also had to wear an e-collar, or cone collar, to make sure she didn’t rub or irritate her eye further. After a little over a month Abbie’s ulcer was healed and she was cleared to play again. Hopefully she is careful now!

If you are concerned that your pet has scratched or irritated an eye, contact us today.

Accessibility by WAH
Call Us Text Us